OPEN HOUSE SUNDAY, JANUARY 29th from 12:00 - 2:00 THIS RANCHER IS SITUATED ON .46 AC LEVEL LOT IN THE HEART OF PERRY HALL. LARGE LIVING ROOM WITH FIREPLACE, KITCHEN...

Take a look at this beauty coming to the market soon; it will be great for entertaining this summer! The large yard holds a nice above ground pool, fire pit and space fo...

You are here: Home / Baltimore County

Baltimore County, located in the northern portion of Maryland is part of the Baltimore-Washington Metropolitan Area. Baltimore County lies between the Piedmont plateau and in the southern region, the Atlantic coastal plain. This makes up the majority of Baltimore County, which is characterized as suburban. Northern Baltimore County is described as primarily rural. This is because of its vast landscape of rolling hills and deciduous forest attributes.

Derived from the barony of the Proprietor of the colony of Maryland, Caecilius Calvert, 2nd Baron Baltimore, in county Langford, Ireland, Baltimore County Maryland surrounds Baltimore City which left the county in 1851 to become its own city. Primarily suburban in make-up, Northern Baltimore County is chiefly rural which can be a large draw for buyers looking for an outland feel while still providing a quick commute for city workers. 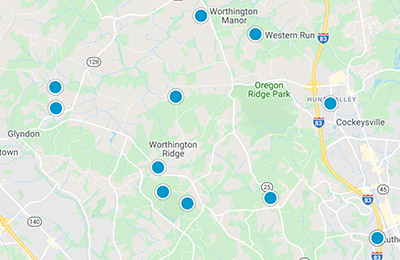